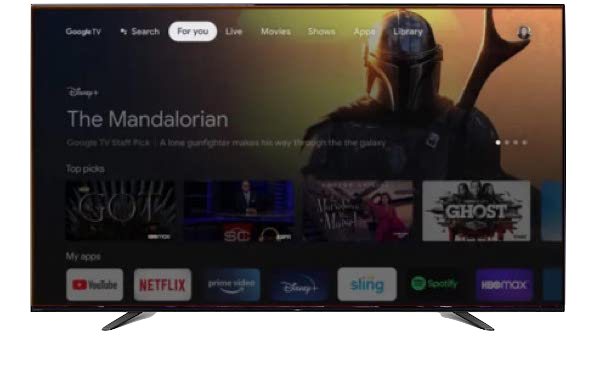 It's no secret that Sony is a fan of Android TV. Instead of opting to use their own Smart TV OS, like LG and Samsung have done with their own specific apps. They originally adopted the Android TV operating system to run their high quality smart televisions.

Now we are hearing they plan on going with Google's brand new OS which is what their newly released media streamer runs on.

Late last year Google released an updated Chromecast that now also runs on Google TV and uses a remote control. Sony decided to make the switch on all their new televisions released in 2021, to use this same OS. CNET considers Google TV to be a remarkable improvement vs Android TV.

Here is what separates the two Android operating systems, and why some seem to like the new Google TV OS better. Android TV is based off Android version 9.0 OS. Google TV is based on their newer Android 10.0 OS.

One feature which makes Google TV nicer is the integrated search feature which will search for content across all your streaming apps and channels. And individual shows can be launched directly from the home screen in a search instead of first needing to open each app individually to search from it.

Voice search is fully supported and this could end up making the process to look for and launch content much faster and easier.

Another welcome feature on Google TV is the ability to add shows and movies directly to your watch list from a phone or PC. The content will be there ready to watch directly on your Sony Smart TV. Not every app yet supports this feature. But the major apps like Peacock, HBO Max, Netflix, Disney+ Rakuten Viki. and YouTube, already do.


Will The Nvidia Shield get the Google TV Update?

Most older TVs and streaming devices like the Nvidia SHIELD will eventually receive the Google TV update. While there are ways to load the newer software now. Early reports from SHIELD owners that tried are not super positive yet.

To load Google TV on an Android Device be sure that it's on Android TV version 9 by checking Settings > Device Preferences > About > Version.

Once verified that your Android device is on version 9.0. download and install both these Google Apps.

When first launched you may need to enable install apps from unknown sources by going into security settings.

To use these new apps, first uninstall the System Launcher by clicking the gear icon (upper right hand corner of the home screen) which then will open the settings menu. Then click About and then on the Build menu several times until a message comes up which says: "You are now a developer."

Then from the new Developer options menu, choose Network debugging and make sure the slider is turned on. Now you need to install this app from Google Play on an Android phone or tablet.

Once installed open Remote ADB Shell and enter your Android TV device IP number. This can easily be found by going to Settings > Device Preferences > About > Status > IP Address. Leave the port number at 5555.

After the IP address has been entered, click the Connect button. Once connected you are now able to access your Android TV or media streamer from your Android Phone or Tablet.

Now that you've connected, uninstall the current launcher on your Android TV by typing the following into your Remote ADB Shell app.

This will then remove the current launcher installed on your TV or Android TV media streaming device. But just in case you want to keep your current launcher settings, use the following command which will only disable it so you can add it back later if you wish.

Once you have entered any of these commands, your app should confirm with "Success" if everything worked the way it should.

Now enter the home screen and the new Google TV launcher and home screen should be visible and ready to use.

Should you wish to install the original launcher, type the following command into the Remote ADB app.

Then type this command to activate the original launcher and make it active again.

This only changes the look and feel of the new Google TV launcher. There are some other features that are not the same without a firmware update.