Largest Forensic Voter Audit in U.S History: Here is how to watch it in Real Time

Largest Forensic Voter Audit in U.S History: Here is how to watch it in Real Time

Maricopa County, Arizona, one of the largest in the State and one that Joe Biden won by a narrow margin is conducting a forensic audit. 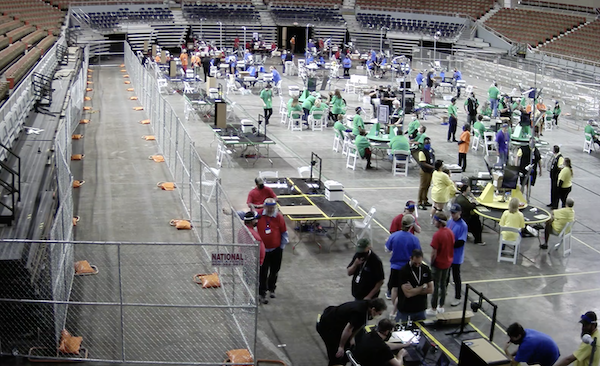 The board of supervisors have tried to do everything in their power to stall or completely stop this forensic audit from taking place.

But the Republican State legislature prevailed, and they brought in an independent team to audit the individual ballots and also the machines used for tabulation of the votes.

The latest ploy to stop this audit from taking place was a lawsuit brought forward by the only Democrat on the Maricopa County Board of Supervisors. The Judge agreed to pause if but only if they the Democratic Party would put up a million dollar bond to pay for expenses incurred by the temporary pause. The Democrats declined to pay the bond, so the audit continues.

But the audit will still have to follow several other orders the Court issued during Friday's hearing.


The judge ordered the Senate and its audit team to comply with all laws governing the right to a secret ballot and the confidentiality of voter registration data. He also wanted to make sure that auditors use only red pens on the audit floor.

The level of transparency in this audit is unreal. Each table has live feed cameras overhead aimed down at the auditing process. And there is a live stream feed on the Internet at this website where anyone can tune in and watch on multiple cameras.

Ultimately, this process will be good for our country, because once and for all it will either expose, or put to rest, the notion that there was widespread voter fraud during our last 2020 election. Currently, half the country believes there was and the other half along with the main street media believes there wasn't.

We are a nation of laws, and we should apply fairly all laws for everyone. Regardless of skin color, political party or which neighborhood one may live in.

The sun is a powerful disinfectant and shining a bright light that fairly and transparently exposes the truth for all to see will be good for all of America. Because as long as there is mistrust between its people, it's hard to move forward together as one nation.