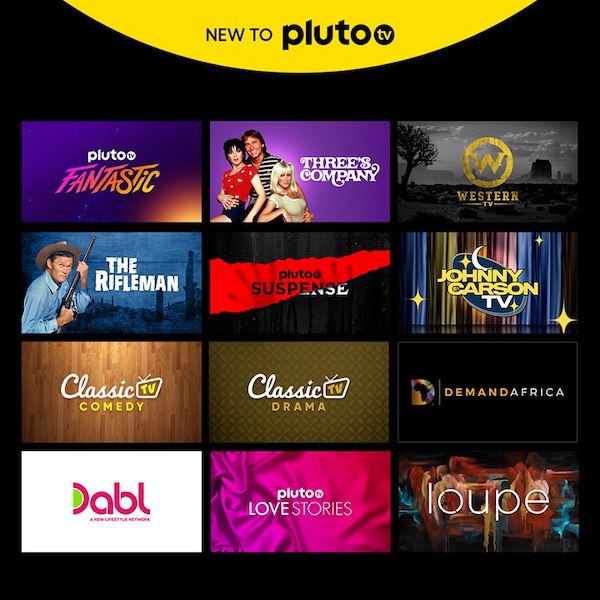 Here is a summary of each new Pluto channel:

Three’s Company: Come and knock on our door! The Emmy Award-winning sitcom that defined an era is now streaming 24/7 on Pluto TV. Watch Jack, Janet, Chrissy, Larry, The Ropers, and Mr. Furley in every comic misunderstanding any time you want.

Johnny Carson TV: Johnny Carson is the undisputed King of Late Night Television. “The Tonight Show with Johnny Carson” ran for over 30 years and created the blueprint for every television host working today. The absolute best episodes are now available. Heeere’s Johnny!

Dabl: Dabl is an over the air network featuring your favorite lifestyle experts! Watch The Martha Stewart Show, Essence of Emeril, Cesar 911, Escape to the Country, Kitchen Nightmares and more!

Loupe: Loupe is the leading streaming art experience representing artists from around the world. View stunning hi-res visuals alongside music for tranquil days and evenings at home, lively décor for parties or the ‘late night’ state of mind.

The Rifleman: One of the greatest Westerns of all time is now playing on its own 24/7 channel, only on Pluto TV. Chuck Connors stars as Lucas McCain: Union Army vet, rancher, father, and owner of the fastest .44 Winchester in the West.

Demand Africa: Demand Africa offers unlimited 24-7 access to the largest curated collection of Afrocentric TV shows, series, soaps, movies and lifestyle entertainment from Africa and the diaspora in the world.

Western TV: Way back when, primetime television was dominated by cowpokes, rustlers, barmaids, schoolmarms, and gunslingers. Flashback to that golden era with one channel that brings you TV’s finest Western series, 24 hours a day.

Classic TV Comedy: The funny moments you remember are here again on Classic TV Comedy. From the most beloved sitcoms to star-studded variety shows, the laughs never end.

Classic TV Drama: If you’re looking for the greatest dramas from the early decades of television history – like cop shows, sci-fi adventures, and more – you’ll find them all day long on Classic TV Drama.

Pluto TV Suspense: Ripped-from-the-headlines thrillers, courtroom dramas, and stories of triumph over adversity are here to get your pulse pounding all day, every day on Pluto TV Suspense.

Pluto TV Fantastic: Escape into worlds beyond our own with Pluto TV Fantastic. Every day we bring you movies with grand adventures, magical creatures, and intergalactic action. Get transported now

If you would like to add Pluto TV, to watch free TV with a nice grid style guide on your favorite media player: Click Here!