Cable and satellite TV use has dropped dramatically in the U.S. since 2015

Cable and satellite TV use has dropped dramatically in the U.S. since 2015

Pew Research has been tracking the cord-cutting movement for quite some time now. The number of former cable or satellite TV subscribers who cut the cord is staggering. And it's only going to keep getting worse. 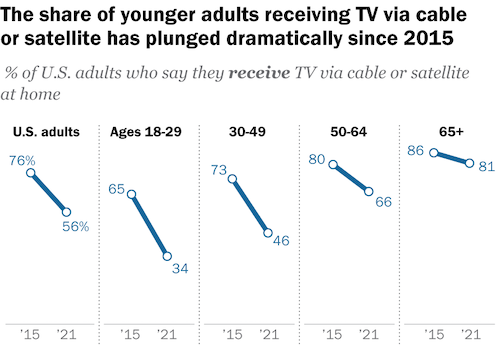 The share of Americans who say they watch television via cable or satellite has plunged from 76% in 2015 to 56% this year, according to a new Pew Research Center survey of U.S. adults. Some 71% of those who do not use cable or satellite services say it’s because they can access the content they want online, while 69% say the cost of cable and satellite services is too high and 45% say they do not often watch TV... Learn more on PewResearch.org